Consideration was given to water depths up to 3500m and consequently subject to very high external pressures which make the pipe collapse strength a major consideration for any project. The linepipe manufacturing process involves a cold expansion operation that reduces the pipe’s transverse compressive yield strength due to the Bauschinger effect. This reduction in compressive yield strength has a detrimental effect on the wall thickness which must be increased. The deepwater sections of deepwater projects commonly have a 3-layer polyethylene coating. During the coating process, the pipe will be heated to approximately 200–250°C for approximately 2 minutes. This mild heat treatment can wholly or partly recover the compressive strength of the pipe material. To take advantage of this strength recovery in design, it is necessary to prove that the coating process recovers the compressive strength to a consistent extent. Historically, collapse strength has been tested using full pipe joints at hyperbaric facilities such as CFER in Canada. The downside of such testing is that it is costly and cannot be performed on a frequent basis within the pipe mill during production. In order to facilitate testing of linepipe during production, an alternative approach can be adopted (©VerdErg Ltd) and procedures were developed by Peritus for testing 50mm-long rings cut from pipe joints. The test can be performed in a pipe mill in just a few hours, allowing its use as a standard production test.

The ring collapse test specimens were prepared from pipe manufactured by a range of Indian pipe mills, Welspun and JindalSAW to the JCOE method. During the JCOE process, the edge-crimped plate is formed into a J-shape by pressing at fixed intervals, starting near one edge and ending near the plate centre. The pressing process is mirrored, starting from the opposite edge, to produce a C-shape. With one final centered stroke, an O-shape is obtained. The O-shape is tack welded, submerged arc welded along the inside and outside seams and the resultant pipe is cold expanded to achieve required dimensional and ovality tolerances, to finalise the process.

To quantify the extent of compressive strength recovery during coating, a portion of the pipe joints were passed through a standard coating line. Coating was not applied to the pipe joints, but otherwise the pipes were processed as if they were to be coated. Internal and external temperature measurements were taken to characterise the degree of heat treatment.

Ring specimens were prepared from both heat-treated and non-heat-treated pipe joints. The specimens were instrumented with strain gauges and displacement transducers, clamped in a test fixture between gaskets, and subjected to increasing hydrostatic pressure on the exterior surface until collapse occurred. Two sizes of pipe were tested, 691.1mm(27″) OD x 40.5mm WT and 660.4mm(26″) OD x 37.1mm WT.

The ring specimens must be clamped between the gaskets of the test fixture tightly enough to form a seal but not sufficient to inhibit their deformation under test loading. Measured strains and displacements were compared against values predicted by linear-elastic thick-wall pipe theory, assuming plane strain conditions. At lower pressures, before nonlinear effects became significant, excellent agreement was achieved. This verified that the clamping of the rings between the two gaskets did not impose undue restraint to radial or circumferential deformation.

The ring collapse test results have been analysed statistically, to determine the extent of compressive strength recovery due to the heat treatment associated with the current coating processes. During full-scale pipe production, the mills will perform similar ring collapse tests at frequent intervals, to verify that compressive strength recovery is being achieved consistently. 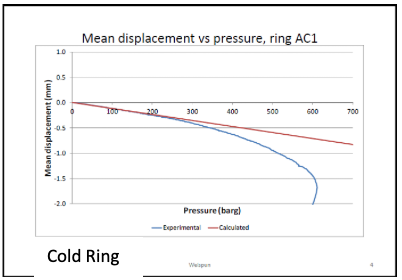 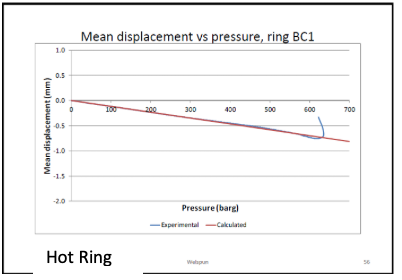