For many field developments and challenging export system projects, flow assurance is one of the first and most crucial activities to be undertaken. Peritus has in-depth knowledge and extensive experience in dealing with the most complex flow assurance problems. 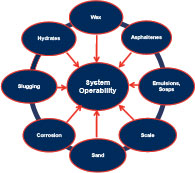 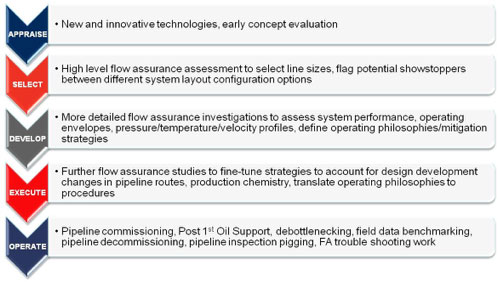 Whenever possible, the emphasis is always placed in taking a systems engineering approach when organising the flow assurance work plan for example:

The depth of flow assurance analysis required depends on the engineering phase.

During the APPRAISE and SELECT phases, the thermal-hydraulic simulation scope of work undertaken by Peritus is designed to produce a high level assessment of the system performance as a basis to compare different concept options in terms of line sizes to meet thermal performance and deliverability requirements and system operability such as hydraulic stability, hydrates, wax and pigging as typically shown in Figure 2.1.

During the DEVELOP (including Front End Engineering Design) and EXECUTE (Detailed Design) phases, further flow assurance studies are undertaken to confirm the system performance for the selected concept. The thermal-hydraulic simulation scope of work is designed to establish the operating envelope for the system within boundary limits on available system pressure, erosion velocity, avoidance of wax deposition, avoidance of hydrate formation and avoidance of severe slugging during normal operation

The prediction of hydrate formation temperatures/pressures and the design of the overall system to prevent plug formation during system start-up, steady state operation, and shutdown (both controlled and uncontrolled) are fundamental to the design and operability of subsea production systems.

The selection of the optimum hydrate management strategy for the system usually involves a review of thermal and chemical management strategies. For gas dominated production systems, the strategy to prevent hydrate formation is typically using hydrate inhibitors on a continuous basis with a recovery unit. For oil dominated production systems, the typical strategy involves some combinationof keeping the fluid warm (insulation) during normal operation and either hydrate inhibition, electrical heating, depressurisation or fluid displacement strategies to handle extended shutdown and restart operations.

Production Chemistry Issues Such as Wax and as Asphaltene Deposition

Peritus has the expertise to determine the most reliable design/operating technique to manage these solid deposition issue including using system insulation (to retain heat, reduce the radial temperature gradient, reduce the temperature difference between fluid and pipe wall) and regular pigging to limit the amount of wax that does accumulate. This is especially true if insulation is needed for other reasons (including hydrate control). It is often prudent to include injection capability in the system design so that chemicals can be injected if found to be necessary.

Liquids management of onshore and offshore production systems often require provision of a slug catcher in order to provide system flexibility to manage normal operational (regular or severe) slugging, rate change/start-up slugs as well as large liquid slugs removed as a consequence of a pipeline pigging operation if deemed to be a requirement.

For offshore floating and/or platform-based systems in particular, slug catchers may not be desirable due to weight and space constraints. Where possible, and particularly for oil/gas systems, it may be preferable to use separator inlet chokes (possibly brought into play by the level control circuitry) to control separator liquid inflow, oil/water drainage rates to be within the surge volume handling capacity.

During the conceptual design phase, an initial assessment of the slug catcher surge volume handling requirement for rate change operations can be quickly performed by Peritus using the Cunliffe method (as this method only requires output data of the steady state liquid content in the system).  For SELECT and EXECUTE phases, more detailed analysis is performed by Peritus to verify the slug catcher size using transient simulation to confirm the maximum surge volume generated from rate change operations (and from hydrodynamic slugging during normal production

An initial assessment of pigging requirements is carried out using to obtain predicted liquid volumes resulting from pigging or ‘sphering’ operations.

The Peritus flow assurance team have considerable expertise in the assessment of system operability issues where the primary objective is to develop operating philosophies, strategies and procedures to avoid hydrate or wax formation at any time during system operation. “Operability” means ensuring that design provisions and operating strategies are in place so that the production system can be started, operated, and shut down under all conditions (planned and unplanned) throughout the operating life of the total system and is central to the overall Flow Assurance/System Design Process.

During the early stages of engineering design, where a considerable percentage of the system input data has been either taken from similar project analogues, the results and conclusions drawn from the simulation results will be relatively cursory.  As the system design moves into SELECT and EXECUTE phases, the flow assurance effort will shift towards more detailed analyses to support operating procedure development and hardware and facilities designs and evaluations.

With the world’s current dependence on fossil fuels and ever increasing energy demands in emerging economies, the control of carbon dioxide emissions into the environment has become an important focus area for all countries in response to the global movement to address climate change. Carbon Capture and Storage (CCS) is the commonly used term to describe the process for capturing carbon dioxide (CO2) from large industrial sources such as coal-fired power stations and oil & gas refineries before it is released to the atmosphere, and to safely transport the CO2 either for storage in mature oil and gas reservoirs, deep geological formations such as aquifers or for enhanced oil recovery (EOR) operations in existing fields.

Peritus has been involved in several CCS projects to assess flow assurance issues in CO2 pipeline transport systems.  For single component fluid systems where there is no phase envelope or, even if minor impurities (< 2%) are present, the phase envelope is very narrow and hence phase changes will be abrupt and result in very sudden change (or non-linearity) in fluid properties at pressure/temperature conditions straddling its saturation line or phase boundary. Such abrupt changes cause numeric instabilities using the basic OLGA® solver whilst with the single component solver, advanced numerical smoothing algorithms have been developed to cope with the non-linear changes in fluid properties around these regions.

Methane hydrate deposits found in deep oceanic regions and under the Arctic permafrost are regarded as the gas resource for the future. These deposits are typically several hundred meters thick, formed as a result of either biological activity in sediments or geological processes deeper within the earth. Hydrates can be dissociated by either lowering the pressure (the ‘depressurisation’ method) or increasing the temperature (the ‘heating’ method).

Peritus has experience in providing engineering design support in this R & D area in offshore Japan where methane hydrates deposits are present in ca. 100m to 300m below seabed in water depths ranging from 700m to 1000m.

The flow assurance issues associated with this production scheme are:

The primary Flow Assurance and analysis tools used by Peritus are:

In addition to discipline engineering roles, Peritus can and has provided Project Management Services in the form of provision of owners engineering teams, supervising the EPCIC contractors during Develop and Execute.  Peritus are able to use their own management and project support systems if required.  Peritus’ Management Systems are certified to ISO 9001.